Have your cake as the Commie Pool celebrates turning 50 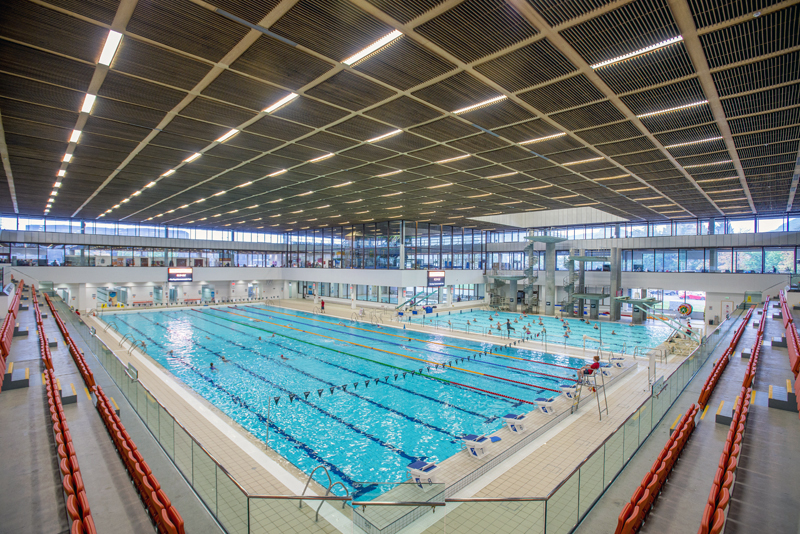 Have your cake as the Commie Pool celebrates turning 50

Edinburgh’s Got Soul Choir will be kicking off the celebrations in full voice at 10 am, singing Happy Birthday, as Scottish diver, James Heatly, cuts a giant replica cake of the Commonwealth Pool, made by West Lothian Cake-tastic, with enough slices to feed 500 lucky customers.   The candles will be blown out by 3-year-old Sophie Ramsay, youngest grand-daughter of Charlie Ramsay, 76 years, who was the first employee to be appointed at the pool in August 1969, where he worked latterly as the Lifeguard Training Manager until his retirement in 2006.

James Heatly is the grandson of Sir Peter Heatly (9 June 1924 – 17 September 2015) who won gold medals at three consecutive Commonwealth Games and became the first man to break the water at the diving pool at the Commie Pool in late  1969, prior to its opening by Her Royal Highness Princess Anne on 16 January 1970.

A number of other events marking the occasion include a free exhibition about the history of this iconic building in the reception foyer which will run until the end of January 2020, along with some specially commissioned prints by Edinburgh-based photographer Soo Burnell, which complement her Poolside photographic artworks.

Pay-as-you-go customers will be able to swim or try the gym for 50p and the morning Aquafit class will include 1970s music and a water-based game of pass the parcel.

For some lucky customers, there will be a free prize draw with 50 prizes on offer, with a winner picked every hour and the chance to win an array of prizes including screening tickets to the Festival Theatre, Clip ‘n Climb family passes, Aquadash slots, Lululemon fitness wear, sportmax nutrition goods and a meal for four at Tigerlily.

Claire Rusack, General Manager at the Royal Commonwealth Pool explained: “At 50 years old, the Royal Commonwealth Pool is rich in history.  Old or new, we’d love customers to share their memories of this iconic building, by positing their memories on one of the specially designed commemorative post-cards, which will be placed on our memory wall.  Does anyone remember the Commie flumes?

The pool was commissioned by the City of Edinburgh Council under a plan by the then Lord Provost, Sir Herbert Archbold Brechin in 1966 as part of a wider project to bring the Commonwealth Games to Edinburgh, who hosted it in 1970. It is the only venue to host three Commonwealth Games in 1970, 1986 and 2014.

Construction began in 1967 and was completed in 1970. The architecture was by Robert Matthew Johnson Marshall with structural input from Ove Arup & Partners.

The pool was closed from August 2009 to March 2012 for a £37m redevelopment, revitalising this light and airy 1970s building, giving it a new lease of life in time for the 2014 Commonwealth Games, where it hosted the diving competitions.

The project, led by Frank and Charlie of S&P Architects (now Space & Place Architects) included new 25 metres (82 ft) diving and teaching pools as well as improvements to the changing rooms, café, reception, and the dive gym.

In October 2015, the addition of a 1m platform to the world-class diving facilities made it possible to specifically launch coaching for children with a wider range of needs. Part funded by Sport Scotland, the new 1m platform joined Olympic standard facilities including 5m, 7.5 m and 10 m platforms, and three 1m springboards.

Today, The Royal Commonwealth Pool is used for swim and dive coaching to both children and adults; offers recreational swim facilities including Aquadash and water-based fitness classes including Aquafit and Hydro-spin; hosts major swim competitions and events; and has a popular café, Clambers soft play and a gym, which is popular with members of the public and visitors to the city.